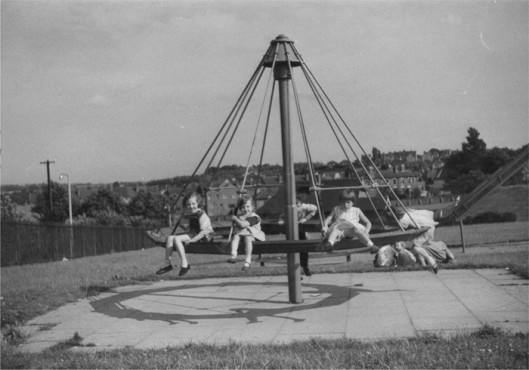 I am a child of the 50’s and 60’s as are a lot of my friends.  We grew up in a time where cars had no seat belts and we often rode in the back of a pickup truck at highway speeds.  We spent most of our free time playing outside and if we got thirsty we went to the closest neighbor’s faucet and drank out of the hose.  We shared bottles of pop with our friends never worrying about germs.  We broke bones, got cuts and scrapes, and lived our lives to the fullest.  You couldn’t buy a toy that wouldn’t put someone’s eye out. We didn’t have a reality tv show about city folks surviving on some island surrounded by medical staff and film crews with a helicopter to evacuate us if there was a problem.  We survived despite our best efforts.

But there was one area that seemed to be designed to aid in Darwin’s theory:  The school playground.  In those days we had recess twice a day.  Rain or shine, hot or cold, we were packed up and marched outside to “play” for a 15 or 20 minute period in the morning and again in the afternoon.  And we almost always migrated to the Devil’s Garden known as the playground.

There they were….the devices designed by some devious minds in order to have the potential to inflict the most possible damage to our young bodies.  And we reveled in it, even spitting in the eye of danger.  But it didn’t always go the way we planned.

The infamous Double Whammy.  An awesome opportunity to climb 15 or 20 feet in the air, do a forward belly roll over the bar at the top and go screaming down the slide, hopefully hitting the ground running and not falling on your kiester.  Designers of this implement of possible death and destruction put “safety” bars on the upper platform to keep us from falling off….right.  They were at waist level and posed no obstacle whatsoever to any 10 year old worth his salt.  More than one of us showed our daring do by standing up on the “safety” bars.  And they were made of metal.  Shiny metal.  On a sunny day anyone who dared to wear shorts was sure to suffer 3rd degree burns to the back of their legs.  And yet we survived.

Growing up we all heard of the urban legends.  “Hey, I heard Jimmy got his swing going so high he went all the way around the bar.”  “I heard Tommy bailed out and landed 30 feet away.”  And we tried.  Lord how we tried.  I was often able to swing high enough to go higher than the top bar but physics being what they are neither I nor any of my friends were able to accomplish a giant swing around the top of the bar.  But not for lack of effort.  When we figured out we couldn’t do that we resorted to our second favorite trick with swings, bailing out.  We would swing as high as possible then at the apex of the forward swing we jumped out, seeing how far we could land from the swing.  We learned that this was a good way to sprain an ankle or break a leg and as a result we learned PLF (Parachute Landing Fall) long before we even thought of being in the military.  Then there was the spin.  We sat in a swing and spun around in circles, twisting the chains all the way up to the bar then letting the chains spin us in a fast circle.  How is this dangerous you say?  Ever spun in circles till you were so dizzy you couldn’t walk straight?  More than once a spinner got out of the swing and staggered into the path of someone trying to swing high enough to circle around the bar.  Epic collisions. 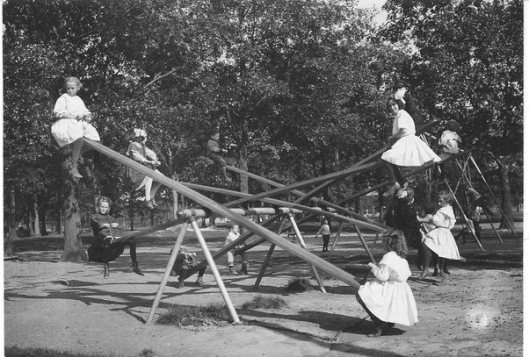 Want to turn your buddy into a soprano?  Here ya go!  I suspect Frankie Valli of the Four Seasons got his start in singing falsetto as a result of playing on one of these things.  All of us did and all of us had a friend who was a rude sadistic person.  “Don’t worry, I won’t jump off and let you crash to the ground….again.”  And we believed them.  Just as Charlie Brown believed Lucy would actually let him kick the football.  We believed them right up to the point where we hit the ground, biting our tongue and smashing our….well, you get the picture.  These things were also the forerunners of the Bongo Board.  We developed our balance by standing with one foot on each side of the center bar, balancing the board as long as we could.  Or by balancing while two of our friends went up and down. 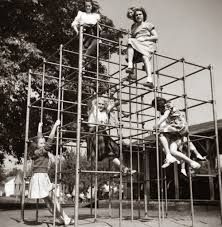 NEVER, EVER get on these if your shoes are even the least bit wet and slippery.  Nuff said.

The Merry Go Round

Seems safe enough, right?  This one isn’t exactly like the one we had on the playground at South Riverside Elementary in Wichita but it’s the same general design.   Ours had a taller center pole and a “safety” bar you could hold on to while your friends spun this thing in a circle.  Aside from the potential to be ejected backwards off this thing or getting a leg caught underneath as you were spinning around, there was another unseen issue and yes, I found it.  Once, I can’t remember if it was second or third grade, I decided it would be a grand idea to climb to the top of the center pole and sit on top of the pole where there was a plate that spun with the speed of the device.  It was great and worked just like I thought it would….until it was time to go in from recess….and I was stuck.  My jeans had gotten twisted under the top plate and I couldn’t move.  My teacher and my friends were finally able to push the go round slowly in reverse and unwind me but the real danger came when I got home and caught bloody hell from my mom for getting grease all over my pants.  Double trouble.

I’ve saved the worst for last.  This device had multiple benefits if you felt a little sadistic towards friends or siblings.  You could make kids puke.  You could see anyone who didn’t hold on tightly enough get ejected and roll across the gravel.  You could get kids so dizzy that they couldn’t walk and would frequently stumble back into the spinner, getting knocked to the ground by the device itself or by the legs and feet of someone hanging off in preparation for ejection.  Truly an implement of destruction.

Since seeing a meme of one of these on Facebook I’ve been conjuring up memories of the playground.  Some pleasant, some not so pleasant.  But it all goes to show that Darwin was involved in the design of all these things.  Their sole purpose was to weed out the sick and clumsy and aid in the process of Natural Selection.  And yet, we survived.  We are a hardy lot, these children of the 50’s and 60’s.