Every year for the past few years I’ve compiled a group of images that are my favorites from the previous year.  Sometimes I wait till after the New Year but not this time.  It’s just a few days till Christmas and I don’t anticipate any new images coming my way between now and New Year’s so I guess it’s okay to choose from the images I’ve accumulated so far this year.

The images may not be my best.  Some are chosen because they’re from a particular place where they were captured.  Others have a story behind them that trigger a pleasant memory.  And some are, in my opinion, prize worthy.  Included among these images are some from a trip to Alaska with my son.  Some are from a trip I made to the Tetons earlier this month in the dead of winter.  Some just tickle my fancy.  Whatever the reason, they all qualify for inclusion on my list of favorites.  So let’s get started. 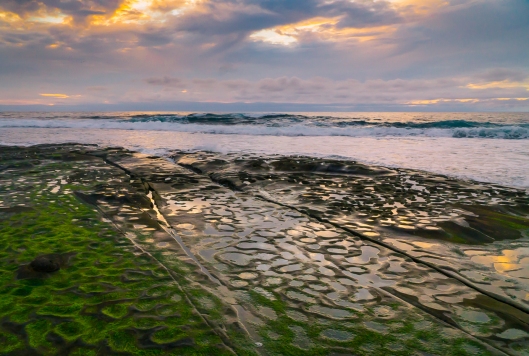 One of my photographer buddies posted some images from this place and I was so taken that I broke protocol and asked him where the place was.  I filed it away in my memory banks and later on during a business trip to San Diego I was able to visit the location.  The sunset during my visit wasn’t as dramatic as I would have liked but I still like this image. 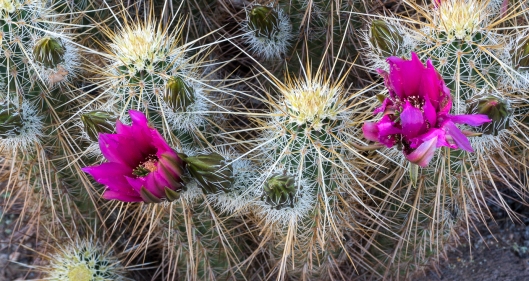 I visited Arizona a couple of times this year.  We made our annual trip in March to see some baseball and hang with Erin and Katrina.  No matter when I’m there I try to visit the McDowell Sonoran Preserve near Scottsdale.  Seems like no matter what time of year I visit the place there is always something to shoot.  In this case, the sunset was great but I also found some flora that impressed me.

This one is the double whammy for me.  It’s visually one of my favorites but there’s a story behind it.  I spent my college years in the Seattle/Everett area of Washington and made some dear friends that I still correspond with and see as often as I can.  I’ve photographed the Skagit Valley Tulip Festival in April quite a few times but never went inside Tulip Town.  This year I had a business trip with meetings in Sedro Woolley and Bellingham in April so I added on some vacation days to spend time at the Festival.  I spent one night with friends Dennis and Theresa at their house in Mount Vernon and the next day Dennis took me on a tour of the tulip fields culminating at Tulip Town where Theresa was working in one of the shops.  Back in the day when Dennis was one of my college roommates I had no earthly idea that I would end up being a photographer.  I didn’t even own a camera then.  But a couple of years ago when Dennis got on Facebook (finally!) he started seeing some of my images and liked them.  So the chance to take him around with me to see how I work when I’m shooting was really exciting for me.  When I was setting up this shot he said “You’re going to shoot that picture with all those ugly clouds?”  I replied “Dude, the clouds are what makes the image.  Clear blue skies are boring.”  Later, when I had done a quick edit of the images he “got it.” 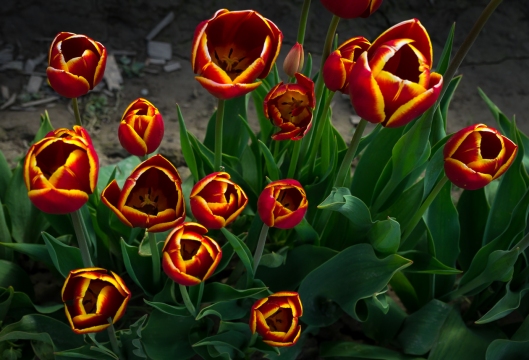 As we were walking along in Tulip Town I glanced down which is something I almost always do when I’m out capturing images, and saw this composition.  I immediately had a mental image of a nest full of baby birds with their mouths open waiting for food from Mom.

Lots of different things go through my head when I’m out looking for images.  A long long time ago in a galaxy far far away I read a lot about Ansel Adams and how he used a technique called Previsualation.  Most of the time he knew before even setting up his tripod how he would process and print an image.  To a lesser degree I’m the same way.  If you see a Black & White image posted by me you can be sure that before I shot it I was thinking “This is going to be a great B&W image.”  Sometimes it’s as simple as thinking “This image is going to be a great panorama.”  And so it is.

I’ve been to Alaska a few times now.  This year, in June, I arranged a trip with my son, Chris, to do some fishing.  Part of the itinerary I selected included a fly out trip to Big River Lake where Wolverine Creek is located.  This is one of the most popular areas for bear viewing in Alaska.  It’s very predictable and has a large population of bears that come to where Wolverine Creek runs into Big River Lake to fish for salmon.  It’s also a great Sockeye Salmon fishery and some of the guides will toss salmon carcasses into the water there to “chum” the bears in if the salmon haven’t started running up the creek yet.  This was one of the things I wanted to see more than anything else on this trip.  I even bought a new telephoto lens for this particular afternoon and I think it worked out well.

The trip to Alaska with Chris was awesome.  We had some time to do a lot of bonding and the fishing was great.  We both came home with full limits of King Salmon, Sockeye Salmon, and Halibut fillets.  We also saw lots of wildlife.  We were based at the Orca Lodge in Soldotna and one day we were relaxing around the fire after being out on the Halibut boat.  John, one of the managers of the Orca Lodge came to tell us “…there’s an eagle about 20 feet from the dock.”  I grabbed my camera with the new long lens and headed down to the dock.  Sure enough, a big bald eagle was feeding on a salmon carcass just a few feet from the dock.  He seemed oblivious to our presence and I had a chance for some nice portraits.

Deception Pass on the north end of Whidbey Island, WA will always hold a special place in my heart.  It was one of the favorite day trips my parents liked to take when we all lived there and I visited the place a few times with them.  This summer I had another business trip to the area and took advantage of a day off to spend some time at Deception Pass.  It was a boring day with clear blue skies for most of the morning but later in the afternoon I noticed some clouds moving in.  There was a lot of upper level winds making the clouds take on some great character and making them visually interesting.  I also saw a gap in the cloud bank near the horizon that I knew would add a little bit of color to the sunset.  All told, I sat and waited for this image to come together for about 3 hours.  But I think it was worth the wait. 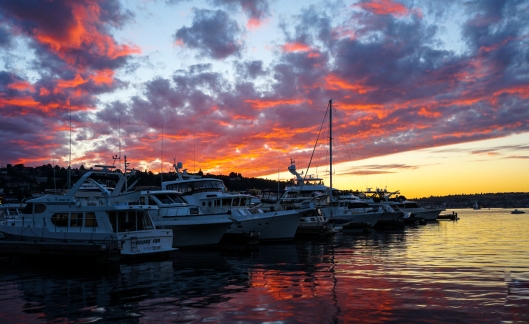 Some years I seem to be assigned a lot of business trips to Seattle.  Depending on the location of my meetings, sometimes I stay at the Silver Cloud Inn on Lake Union.  It’s close to one of my major clients in Seattle and a short walk from a couple of my favorite restaurants in the area.  One evening I noticed the conditions setting up for a great sunset so I grabbed my camera and walked across Westlake Avenue to this marina.  The sunset lit up the sky and I got it!

Back to seeing panos…I had a business trip to Afton, WY and as it often happens when I’m working near an area I want to photograph, I added an extra day for chasing images in Grand Teton.  I’ve been to the Tetons 15, maybe 20 times over the years but never in the winter so I was anxious to see the area.  Most of the visits to GTNP have been in the spring and while I’ve seen lots of moose I don’t have any images in my files of a big bull moose with a full rack of antlers so that was my secondary objective.  I saw some moose but conditions weren’t optimum so I’ve not included any of those images.  For the 2 days I was able to photograph in the park there was lots of fog and it was really cold.  The result:  lots of trees with frosty limbs.  An interesting thing about this image is that this is the color version, not a sepia toned conversion.  The sun was at a really low angle at sunrise and defused nicely coming through the fog. 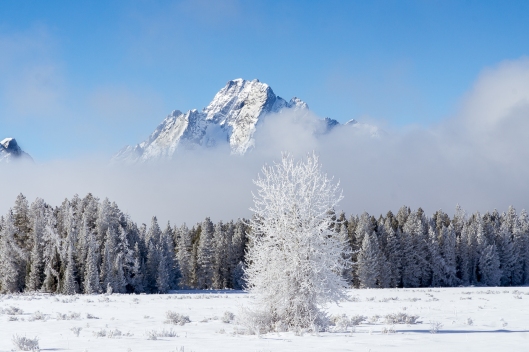 I wasn’t really looking for this image when I drove further into the park but definitely didn’t turn it down.  My original intent was to fix in my mind just where the Pilgrim Creek road intersected the Yellowstone/Grand Teton highway.  Pilgrim Creek is the area where famous grizzly #399 and her cubs usually spend the winter and where they’re first seen every spring.  399 was the first grizzly I was able to photograph and I’ve seen her a few more times over the years.  She’s very special to me and I wanted to know more about her.  Anyway, the sun was up past what is normally considered to be the best light for photography but the fog had left lots of frost on the trees and this image just sort of hit me in the face.  I love the combination of the layers with the added element of the frosty tree leading up to the mountain peak.  And who knows….maybe next year’s Christmas card image? 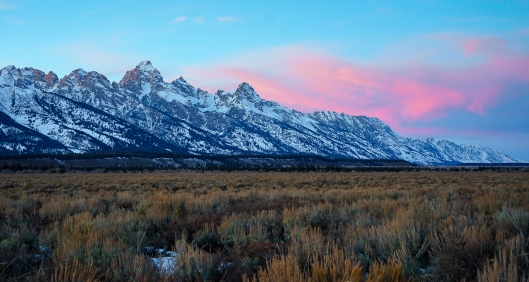 I think it’s appropriate that I close this blog entry with the last image of the year.  After a wonderful frosty day in Grand Teton National Park I stopped at one of the turnouts to wait for sunset.  The clouds added some color and it was sort of a perfect ending to a productive year of photography.

So what’s in store for next year?  Well, a lot of that depends on where my business meetings take me.  We have planned a week of vacation in Seattle during July and I will be making a couple more trips to Arizona and to western Colorado.  Maybe this is the year I’ll spend some time photographing in the San Juans of southwest Colorado.  Who knows?  Wherever my travels take me I know I’ll find some excellent images.  So stay in touch and check back next year.